So key Infusionsoft system number two from our Infusionsoft training guide, something I call the win-back system. So what’s the win-back system? It’s a way of winning back a patient who told you, no. So a lot of times it happens. You don’t want a two patient tell you, “No, not right now. Can’t afford it, want to cheaper option,” or whatever. And the galleys used to think that that was a given, that just patients said no, and that was it, it was done.

There’s nothing else that could happen, until I put this system in plan. This is easily one of my most profitable systems. Most patients leave a physical therapy clinic and the owner thinks that it was down to the money that the patient said no.

So if you ever get push-back from co-pay or deductibles, or costs, or just halfway through the treatment plan, they tell you they found somebody cheaper, you can naturally show him that it was all about the money. Now, it isn’t always about the money. Oftentimes, they’ll just give you excuses, because it just isn’t the right time. It doesn’t mean that you’re not right, it doesn’t mean that your price is not right, it just means that right now, in that world, it’s not right. And that’s the messed and most important thing. So it’s important to understand that, that the price might be all right next month, but this month, it’s a problem. Okay, good. Let’s just build a system that factors that in.

And when you grow and as you scale your business, this will become more of a factor. So in the beginning, you know, if you’re the only therapist, or you’re still heavily involved in patient care, you can control a lot of these things, and you keep the stuff in your head. But as your business gets bigger, and you start to expect PTs to call these people back or you relying solely on a physical therapist to make this call back to get them back on schedule, it’ll happen. And if it’s a frustration of a lot of business owners that, is that they expect the PT or the expect the front desk person to call these people back.
And with all the will in the world, it’s not gonna happen. Even if they do generally set out that day to call the three people back who dropped off schedule or, you know, you do, all this stuff gets in the way. So having a system working for you means that these patients can be coming back to you while you’re treating somebody else and/or doing something else because Infusionsoft is doing the hard work for you. So it’s got nothing to do with the money for most people. It’s a timing issue for most people, or they’re just weren’t ready for it right now, same thing. So they often make excited decisions at the beginning and come and see you, and the expense was the only thing that they could think of to slow the decision making process down.

So often a month or two letter, that patient still hasn’t received the care or the outcome that they needed, nothing changed except they know accept that they need what you do. So if they leave your care to their, you think they’re going somewhere else, and most of the time they’re not, because if it wasn’t the right time with you, it wasn’t the right time with anybody else. So nothing will have change, most of them will still have that chronically knee pain or back pain. But what will have gone on is they’ve had another two months to realize how valuable and the need for your service actually is. Patients are very likely to call you back. This is why this works.

Out of their own free will, we wish they would but they just don’t. Six to eight weeks later when they’re still suffering with that knee pain or back pain, and they haven’t got it solved, they don’t call you back. If only they did, but they don’t. The reason is they’ll often feel silly and stupid for saying no to you a few weeks ago. They might think that you think they’re tight. You know, we live in a very judgmental world, and they may think that it probably isn’t true, but it’s their perception of it that matters. And all of this is gonna get in the way from them ever coming back to see you even though they want to or need to.

So have a system built inside Infusionsoft for nurturing the patient back to my physiotherapy clinic. It started by a receptionist who enters the details into another webform. So we have another one of those webforms, which just kick-start another system of communication to that particular person. We just put their name, telephone number, and email address into the webform, and boom, Infusionsoft starts talking to them on our behalf. So I don’t need to worry about my secretary or physio remembering to do it today. The system will do it for me.

And on average, we win-back around about six of 10 patients within three months, and they always come back better patients because they’ve either tried some other crappy provider, or they’re in a worse condition than they were because under the two months of back pain, they’ve got even tighter or stiffer or the chronic pain is the inflammation is whatever. So they often come back as better patients. So the win-back system from our Infusionsoft training guide is incredible.

PAUL GOUGH is one of the top Marketing and Business Coaches in the physical therapy industry and his Systems are helping clinic owners all across America run more profitable clinics. He is a published Author, Newspaper Columnist and before his stunning success in business was hired by top professional soccer teams. HIS SUCCESS STORY is one that inspires many pt's around the world - at the age of 26 Paul QUIT a high profile job in professional soccer to begin his own clinic. He had NO money, NO business or marketing skills and NO experience - and yet now owns and runs 4 pt clinics and has a proven track record of growing a physical therapy business from 0 - $2m in record time. 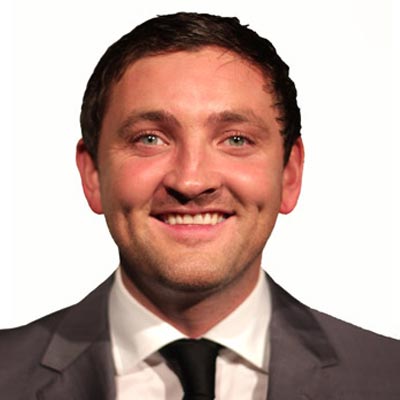 He helps small and independent physical therapy clinic owners in America – from Rochester Hills (MI), all the way across to Orange County (CA) - get more new patients without needing referrals from Doctors using direct to consumer Marketing Strategies. He is a published Author, is the owner of 4 PT clinics, a weekly newspaper columnist and before his stunning success in business was hired by professional soccer teams as head PT.

Sign Up To Get His Marketing Tips
By Email 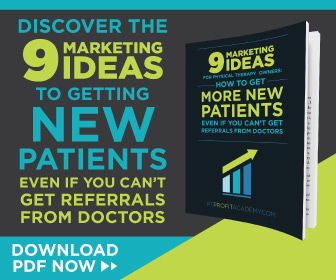 What Other Physical Therapy Clinic Owners Are Saying

It’s incredible what Paul has accomplished at his own practice... I look forward to every call I have with him… and learning more and more from him about direct Marketing my own cash practice.

Paul shows you how to market a successful business in today's economy and has completely changed how I market my (hybrid) clinic. If you want to set up a system to market your practice, I don't think there is a better teacher out there.

If you want strategies to help reduce or eliminate your insurance headaches, Paul is the person to show you how – he has concrete ideas to implement rather than strictly theory like so many other PT marketing people.

Paul has the Marketing solution to the changes occurring in the marketplace for private practice PTs… he is direct, provides clarity and really opened my eyes on the possibilities for my clinic.

Paul’s focus is on the higher, longer term gain for your business, he shows you the systems that are needed to gain new patients and maintain growth throughout the entirety of your business.

Paul gave me a marketing plan that is fully automated and helping grow my practice without relying on marketing to doctors. Even better, I am now able to attract patients that are in my target market instead of feeling like I have to treat any patient that a doctor refers to my clinic. Paul is highly informative and very inspiring.

Paul showed me how to raise my prices by implementing a real price strategy at my practice…I went from charging $95 to $180 almost overnight - with zero resistance - just by implementing what he told me to do. I’m excited to be working with him and watching my clinic grow!

Paul is doing amazing, cutting-edge things in the field of PT marketing – I have no doubt he’ll soon have more owners wanting to work with him than he can handle…if you want to grow your PT practice, you have to connect with him fast!

Almost immediately after hiring Paul he helped me generate more revenue in my business by changing our internal sales systems and improving the way my team connect with patients. I look forward to every call I have with him.

To be able to compete against FREE is amazing… the marketing tips, techniques and mindset offered by Paul are absolute gold!

After a short meeting with Paul, he opened my eyes to the possibilities of what automation and direct response marketing can do to my business - and I am excited to now be taking my PT clinic to stratospheric levels under his tutelage.

In just a few short weeks Paul put a marketing system in place at my clinic that is now helping me move away from relying on doctor referrals and seeing 30 patients per week, to my goal of 100 - he will give you good idea, after idea, after idea!

Paul is refreshingly honest, straight-forward and easy to talk to and I love his no-nonsense approach to direct marketing. You’ll find with Paul that he is up front about what to expect, and more importantly, he is honest enough to tell you what NOT to expect, as far as a massive influx of new patients happening by tomorrow. I’ve recommend him to other PT owners who have been equally impressed with their results.

Because Paul is a physical therapist from outside of the U.S system, he has not been indoctrinated in the same, often limiting school of thought as many of us have when trying to grow our clinics - I’ve found that gives him a distinct advantage as he brings a fresh perspective to every marketing or sales problem I've ever asked him to tackle...